A turtle who crossed the road

A turtle who crossed the road 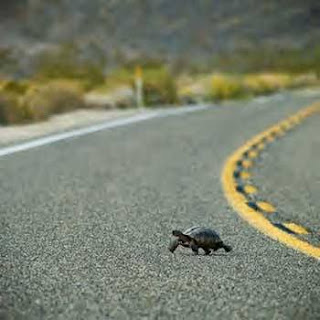 This is a positive sharing. After five days to self heal by some ways. A once teaful story can now actually bring encouragement to the earth.

The apology is on me if reading the following story might make you moody in some ways. But I hope with courage to share, I did let go of the sadness, and turned this into a experience to share. So when more people are coming across the similar situation, they can react quickly, to make things better!

It's been four days since a thing that occurred, on Oct. 11. Now I shared 'cause I hope to have reacted to the environment more quickly.

That evening was really dark, and I was riding a scooter on a small narrow road. This road has many big trucks that come and go, quite unsafe for riders.

As I rode ahead, I spotted a very small black thing that was stuck in the fast lane, not moving. I could not identify what it was actually, then while I approached I saw him, and he reminded me of some cute little lives I just saw yesterday in the park, where there is an artificial lake with fishes, ducks and turtles showing themselves around.

In the park, there were several turtles who climbed up the rock, sunbathing with one on top of the other. I found them funny with their heads rising up, looking far. At that moment, that scene made me believe that turtle also has a soul.

I was actually very enlightened by this discovery, because no one ever mentioned this to me, and now I found out that turtles do have a soul, just like humans. This is not taught from scholar. And I found it out and thought it this way from my own feelings.

So I start to want to understnad them, adoring them more, just from yesterday. I had little chance access to any turtle all my life, so I barely had any impression on them. This was probably due to that I myself had a cat to raise and I placed most focus on my cat.

So, that night while I passed that little black thing on the fast car lane, just while he was next to me and I saw his head, the idea just jumped into my mind that told me : That was a turtle! I saw similar one in the park yesterday..

While my scooter kept going ahead, then in three seconds I pulled over and turned back to where I just passed by the little thing. With instinct, everyone would be pretty alike, to want to help moving the turtle away from the middle of the road.

While I came back and parked well, it was just like ten seconds. And all of a sudden,  before I can sense anything, a really big truck whirled itself through across the road, between the little thing, and me..

The reason till today I was still sad was because, I witnessed the whole process, seeing that the turtle could be scared off by the strong lighting sent from the truck, and he started to move by himself to want to continue moving ahead to the other side.

I heard the sound of his turtle shell breaking, and..

I could not speak, while seeing this, with several minutes long.

Just when I was about to move him away from the road, the situation did not give me and the turtle a chance at all.

I wasn't given the chance to even shout to the driver to stop.

All happened in seconds.

Then some cars continued to pass by, and I wanted to shout to them not to keep running over on him, but i could not shout at all, since I started burst into crying.

I was all lost while seeing this for just these seconds, and did not know what to do, since I had no experience at all about saving a turtle.

Then I decided to leave the spot, tears not stopping on my way riding home. I rode really slow like 20 kilometer, since I kept thinking how SPEED is the reason why the turtle got run over.

I wondered what went wrong with the truck driver since he could have seen the turtle from driving seat, but he still decided to keep full speed driving ahead without stopping..

Then I also feel bad to put the blame without really talking with the driver to figure out why he decided to do that. In human world, everyone has a story that no one understands if no communication to be channeled.

So I stopped finding the faults. All I could do on my way home was with my own tears to mourn for the turtle who I started to feel like close.

Then I wanted to start doing something positive to want to do something for the turtles. I thought there could be same environmental issues with the turtle species, so I googled and found out it is true that lots of turtles are facing the same issues of cross the road danger.

I believe that there must be some reason they have to cross the road, and no one can change this fact. All we can do is to avoid same accident to happen to other turtles.

Then I realized there are so many knowledgeable people who teach how to help turtle cross the road.

And I still feel sad for this turtle who passed away since the road he was climbing was the busy road with many big trucks that are speedy.

He was just unfortunate to have to climb on that dangerous road.

And I also wished that if he could have just remained not moving while the truck drove by, for he might have chances to stay safe since the wheel seems not going over where he stayed.

But he just simultaneously moved ahead, and the wheel..

This was really sad to see. It showed how innocent this little creature was, and he was so lost while staying on the road, and he got no help at that time.

That's why I felt so sympathetic about this turtle, for his innocence. In some ways, I also felt he sacrificed for some kind of unfriendly city planning that humans have done.

It was the SPEED.

Then I thought if there is speed limit on that road, perhaps drivers would be more able to notice and to watch out on a turtle like him who stays in the middle of the road, not moving.

And this could be one of the solutions to most of the roads nowadays while turtles may appear.

Just when drivers are driving slowly, they can have the ability to react what's around them. while speeding, driver could not feel what is by the side, mostly.

Then I wish the truck driver who run over the turtle in this incident, could have driven slower, maybe just like me a scooter rider with 20 kilometer in speed, so he might have the senses coming back to notice there is a life ahead and he can choose to pull over in a safe way too.

I know in real world speed limit could not get down so slow as i imagine. I just thought for every area, if there's living creatures who often show up, then it is good and sweet to think for these lovely creatures who color our environment by their liveliness! The speed limit can be discussed to make it work for the time to notice around.